Hemophilia is a lifelong bleeding disorder that prevents blood from clotting properly. People with hemophilia do not have enough clotting factor, a protein in blood that controls bleeding. The severity of a person’s hemophilia depends on the amount of clotting factor that is missing.

A person with hemophilia does not bleed faster than anyone else, but bleeding may last longer. The main danger is uncontrolled internal bleeding that starts spontaneously or results from injury. Bleeding into joints and muscles can cause stiffness, pain, severe joint damage, disability, and sometimes death.

How do people get hemophilia?

Hemophilia is usually inherited and about one in every 5,000 males is born with the disorder. It cannot be caught or transmitted except through inheritance but can sometimes occur when there is no family history of hemophilia. About one third of new cases are caused by a new mutation of the gene in the mother or the child. In these cases, there is no previous history of hemophilia in the family.

When the father has hemophilia but the mother does not, none of the sons will inherit hemophilia, but all of the daughters will carry the gene.

What are the signs of hemophilia? 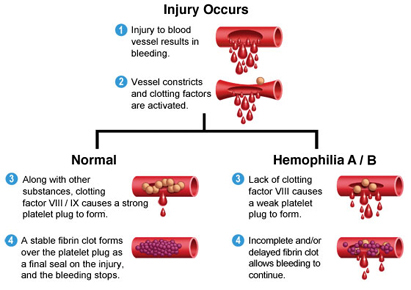 How is hemophilia treated?

Effective treatment for hemophilia is available, but as yet there is no cure. Hemophilia is treated by replacing the missing clotting factor in the blood. This is done by injecting a product that contains the needed factor into a vein. Bleeding stops when enough clotting factor reaches the affected area.

With proper treatment, people with hemophilia live relatively normal lives. Without treatment, most children with severe hemophilia becomes disable at young age. An estimated 65,000 people in India are living with hemophilia out of which only 12,500 are identified.